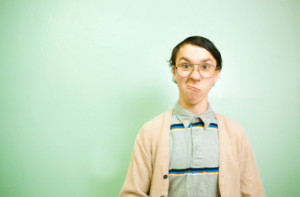 Teenagers can be awkward. Teenage boys almost always are awkward and teenage girls often feel awkward even when they are not. This awkwardness can be really challenging for parents--particularly parents that want to help their son or daughter grow toward maturity. At times (sigh!!!), maturity might seem light years away!

The first key before everything else is: don't panic unless panic is necessary. Young teens (7th though 9th grades particularly) can be a mess. Some of this is because lots of things are happening to them. They are growing physically. They are becoming more self-aware as a person. They are beginning to have opinions that do not just mimic the views of their parents. They want to be cool, and often they are not (some very not!) cool. This is growing up. It is not the time to panic, but it is hard work.

There is a time to panic. When your child is doing things that will cause long term harm or when they are wandering away from (rather than just testing or asking questions about) their faith, it is time for parents to spend a lot of time having heart to heart talks with their child. Sadly, these times when real panic should be happening are not the times when parents are tempted to panic. We are tempted to panic when the music, clothing, or hair cut desires of their awkward teen change. When small differences develop, this is a great time to talk about "why?" rather than panic. Panic sends the wrong signals. Over the years, I have noticed that this is probably hardest for moms with teenage boys. Boys can be awkward in so many ways and they seem to enjoy it. They smell funny, look scruffy, and act in ways that seem to be calculated to offend their mothers. Moms often get very sad because they believe (and this is a sensible belief) that the unthinking action, the unkempt hair, or the unkind word is being crafted carefully in their son's heart. They think that their son is like them (or like their daughter). Teenage daughters see the meaning in words, in actions...and everything else (even things that do not exist). Teenage sons most often don't. The gross action of a teenage boy happen because he does not look before he leaps or think before he speaks. They don't see the plain and sometimes offensive meaning of the actions they take or the cruel words that they say. This does not mean that is he okay. He must grow to be a man and we can't be content until he does. This does mean that often awkward teenage boys are immature rather than thoughtfully callous or cruel. Seeing this difference is critically important. Immaturity needs hopeful discipline, hard work to give energy and direction, and faith mixed with patience. Immaturity is normal. It needs to be cured, but your son might be on his way to being a responsible adult even when he might look like a ragamuffin!

Second, find an environment where teachers and students help to rub the rough edges off your child without rubbing them (or you) raw. This might be the most important thing that is undervalued. A good environment helps us grow out of immaturity. Often, parents are content when they find an environment for their child in which they have friends that accept them. So far; so good. Too often, however, parents are content when their child finds a clique of friends who accept him or her. This clique might well be cut off from the world. Cliques can be very dangerous for helping your child grow out of awkwardness. They are dangerous because the clique is gathered to celebrate the awkwardness. The best environment is one in which your child is accepted where they are but subtly encouraged (particularly by older students) to grow up. If you are considering a school for your awkward child, see if you can meet the older students in the school and see if there are connections between the older and the younger students that encourage the younger to grow out of awkwardness. At Veritas, we have four Houses (Chesterton, Clairvaux, Euler, and Francis). All 7th through 12th graders are assigned to a House. Their House meets for morning devotions, works in service projects, plays games, and has times where they break into small groups for prayer. The older students are taught to reach out to the awkward and young and draw them in. The success of their house depends on this! The younger are accepted by the older students--not by instruction, but through gentle interaction and good example--calling the awkward to maturity. We really struggled with this in the early years of our school. As a father of four daughters, I am so thankful that they are now looking up to examples of young women who are confident, strong leaders, who provide for them a living road map of what they want to be! If you can find an environment like that, get your awkward teen into it.

Finally, love your awkward teen even when (or especially when) they are most unlovable. Teens will hurt you. Growing up is hard work. Make sure, however, that their growing up is not about you. As a parent, know where you want to go, put your arm around them, and go in a direction. You might get to a point where this method does not work--where your teen refuses to follow your lead. If so, stop and spend some time talking with them about why you want them to so something or make a certain choice. After you share your reasons, listen to them. If you are far apart, take some time to think and pray about it. Unless their choices are sinful, harmful (I mean physically dangerous not simply something that you as a parent don't like), or impossible, then find a way to compromise. Find a place where you as parents can show love to your child. Your love and your relationship with them is more important to their future health, maturity, and identity than almost everything else. Our culture talks a lot about unconditional love, but good parents struggle to practice that love in a way that is appreciated by their children--particularly when that child is an awkward teenager. Love them; tell them you love them; prove that you love them even when their awkwardness puts you to the test.