Rhetoric in a Digital Age: Training Students to Master the Arts of the Word 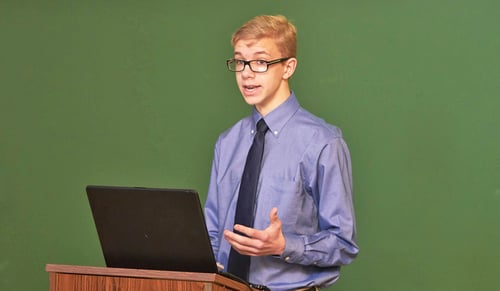 You rise up before an audience of peers, friends, professionals, and leaders, take a deep breath, and present your stance on a divisive topic. You've researched the perspectives and implications, and you feel passionate about what you have to say. You know there will be some who disagree, even vehemently. But you know that this conversation is one that must be had, and you're willing to help make a healthy dialogue happen.

Whether it's in person at a gathering among friends, or at a formal speaking event, or on one of today's ever-present social media platforms, most of us have encountered opportunities to participate in a conversation about touchy or difficult topics (there are certainly plenty of those to come by nowadays). Some of us navigate these conversations deftly. Some of us avoid them whenever possible. Each situation, and each platform, is unique in how it should best be handled (or not handled at all, as many haywire comment threads have proven).

This generation of students is faced with a world where the proliferation of information - and the opportunity to share information - is more abundant than ever. In their pockets, at their very fingertips, the audience of the world awaits. Now more than ever, it is crucial that our kids graduate with the ability to think critically and communicate wisely and effectively. 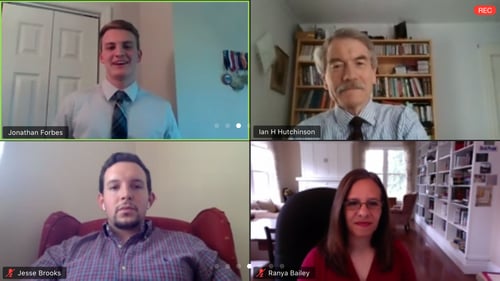 This week, our Class of 2020 presented and defended their capstone Senior Theses. For the first time, this was done virtually, via everyone's favorite new tech ally Zoom. This process is a year-long culmination of the final Rhetoric phase of the Classical Christian Education Trivium, whereby students apply their Biblical and historical knowledge and their critical thinking and communication skills by researching a cultural or theological issue, developing a thoughtful stance, and discussing that stance with an audience and a panel of experts.

While it's certainly an effective exercise in public speaking and research, the Senior Thesis (and Junior Thesis, a similar project in 11th grade) is just one final stepping stone in the Rhetoric journey, which develops students' thinking, listening, and communication abilities In this article, Veritas Dean of Students and Omnibus and Rhetoric teacher Graham Dennis outlines why a Classical Christian Education in the Trivium - and specifically Rhetoric - is vital to cultivating graduates who can Biblically and thoughtfully use the tools at their disposal to engage the culture before them.

An Ancient Model for Modern Times

The medieval curriculum was divided into a Trivium and a Quadrivium. The Trivium consisted of subjects related to what Dr. Jeffrey Lehman of Hillsdale University calls the “arts of the word.” Dr. Lehman suggests that the Trivium forms the foundation of an education because it helps us to speak clearly and understand relationships between things.

The Quadrivium, on the other hand, focused upon the “arts of number.” Whereas the Trivium consisted of grammar, logic, and rhetoric, the Quadrivium focused upon arithmetic, astronomy, music, and geometry.

Number is the language that is used to understand rhythms and patterns in the natural world. For instance, music is a system of ratios as sound is measured in incremental “steps.” There are sympathetic harmonies and ratios that produce “sympathetic vibrations” in our ears and are therefore pleasing to our ears; there are antipathetic combinations of sounds that create dissonance and tend to be displeasing to our ears. The pace and rhythm of music is obviously a mathematical ratio that can be depicted in notation. Mathematics also plays a very important role in astronomy, as the movements of the heavenly bodies are understood in terms of geometric conceptions about how objects are related to one another in space. Moreover, physics considers forces by the application of mathematical models to the movement of objects in space (and the forces that act upon them).

All of these subjects and disciplines are important to a well-rounded, knowledgeable life, to be sure. But it's worth noting that the arts of the word come before the arts of numbers.

Language as a Foundation

The key point is that our ability to use language - and to conceptualize and order our thoughts in language - serves as a necessary foundation upon which all learning rests.

Galileo, Copernicus, and Newton needed to make compelling and persuasive cases for their ideas. They wrote books. They spoke in public. They used the “arts of the word” to persuade the world of the conviction that they had acquired through practicing the “arts of number.”

The Crucial Role of the "Word" 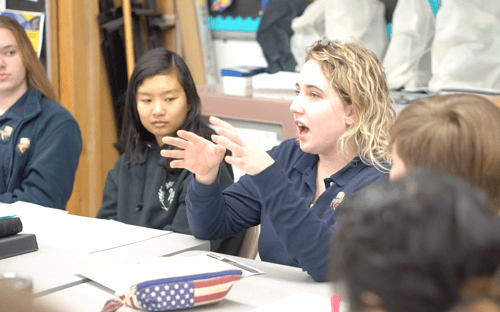 What we may miss, however, is that a properly educated person must excel in both arts. Isn’t it strange, then, that rhetoric and logic have almost entirely disappeared from our school curriculums? Rather than being governed by an orderly conception of the rules of understanding and orderly and persuasive communication, the “arts of the word” are increasingly governed by the cultural whims of the moment. This has become the place for sociological experiment, progressive agenda, and intellectual fads. Grammar, logic, and rhetoric presuppose rules that govern the “arts of the word.” And it is through adherence to these rules that a student learns to master the arts, and to become a mature evaluator and communicator of ideas.

Let’s consider, briefly, why these “arts of the word” (especially logic and rhetoric) are so important, especially in our digital age. In a digital age like ours, students are continually bombarded with information that presumes a stance or orientation. However, there has never been an age in which the following two problems have converged so strikingly:

I’d simply describe this crisis as more information than we can handle thoughtfully and less and less capacity to handle that information. There are many competing voices trying to find space in the crowded marketplace of ideas and ideologies. The tools of persuasion of the peddlers of these ideas will continue to be more and more crafty and manipulative, and more and more misleading. Students need to have tools of discernment to consider the information with which they’re bombarded, but also rhetorical tools of persuasion (both internally and externally applied) to make their Christian convictions compelling.

Consider the mastery with which our Lord and Savior used the “arts of the word.” He used logic to confound his opponents. He used literary devices to make his words memorable. He used rhetorical tools to engage his audience and draw them into the mystery of his mission. As the Logos (the incarnate Word), he expressed mastery of the grammar (the foundational elements) of speech so that his eternal words could last across generations, cultures, and languages, and could be understood clearly by all his sheep. 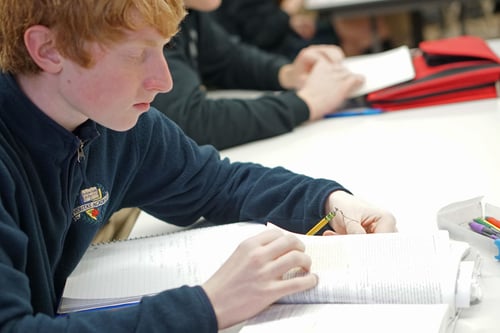 The “arts of the word” (grammar, logic, and rhetoric) are indispensable tools for Christians students as they consider the dizzying array of ideologies that bombard them daily. But, and probably more importantly, they are necessary for creating conviction. Rhetoric plays a role in convincing others of the truth of the Gospel and our most deeply held Christian convictions. It also plays a role in convincing ourselves. Students who practice sound logic and rhetoric create an internal dialogue in which they persuade themselves of the truth of their convictions. It is internal conviction and order that produces the fruit of external conviction and persuasion. In the famous apologetics verse, I Peter 3:15, consider what Peter says about preparation: “…but in your hearts honor Christ the Lord as holy, always being prepared to make a defense to anyone who asks you for a reason for the hope that is in you; yet do it with gentleness and respect.” (I Peter 3:15)

Notice that the apologetic task presupposes an internal preparation for an external communication of the Gospel. We need to develop mature internal conviction so that we will develop a mature and compelling external witness for Christ. Consider how Ephesians 4 presupposes the absolute essentiality of mature conviction, “so that we may no longer be children, tossed to and fro by the waves and carried about by every wind of doctrine, by human cunning, by craftiness in deceitful schemes.” (Eph. 4:14)

The Trivium, the “arts of the word,” help us to create internal conviction that produces Christian maturity, and such maturity is the only way to protect against being tossed about by “every wind of doctrine, by human cunning, by craftiness in deceitful schemes.” Sure, these arts also have a pragmatic value insofar as they will give us a “leg up” on our competition in the workplace. But please don’t mistake my argument for assuming that this is the most valuable quality of the “arts of the word.” The most valuable quality is in helping us to achieve mature internal conviction so that we might winsomely and persuasively convince the world that of all available options, submission to King Jesus is the most superior, satisfying, and soul-enriching.

How Veritas Equips Students to Master the Word in the World

Students at Veritas Academy are constantly required to communicate their convictions using the “arts of the word.” They take two years of logic. They take a year of rhetoric. And they write two thesis papers that they must defend publicly. Moreover, they try out their ideas in Omnibus discussions, learn to communicate their ideas beautifully and persuasively in essays, and regularly are pushed to develop the “arts of the word” in their thinking. Our goal? To cultivate in students a powerful life of mature internal Christian conviction so that when they head out into their lives beyond Veritas, that internal conviction may overflow into a life of mature external expression of the Gospel of Jesus Christ.

Want to know more or experience Veritas for yourself? We welcome you to meet us in a private Virtual Tour! 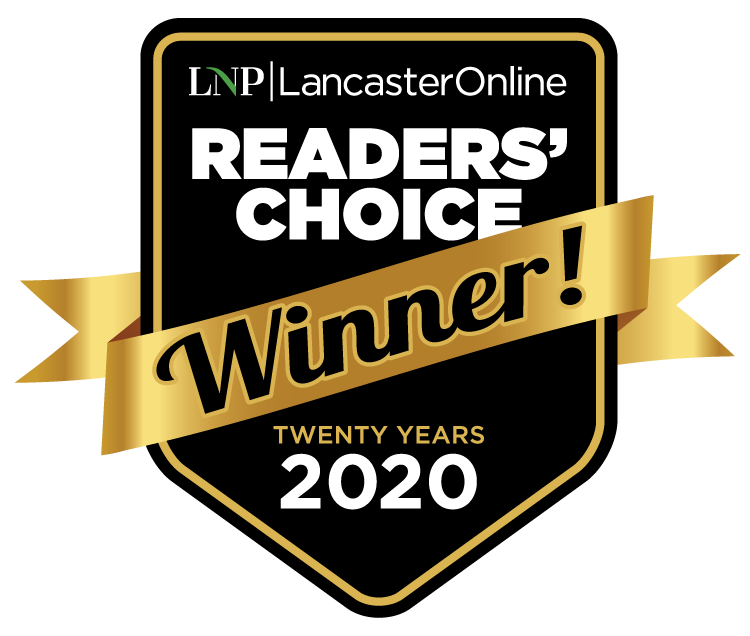