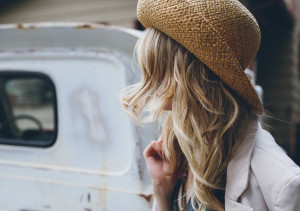 I love school uniforms. They mask socio-economic differences allowing friendships to flourish. They insure academically fitting dress for our students. They protect the dignity of our young men and women. School, however, is not the only place where issues of dress and modesty crop up. They flare up on family vacations, Sunday mornings, and Friday nights. Sometimes these issues can be exceedingly painful for parents and children, and can do great harm to the relationships of mothers and daughters. So, how can parents protect the dignity of their children and encourage standards of modest dress without making their daughter think she needs to dress like something out of Little House on the Prairie or Pride and Prejudice? Here are three things you should try:

We must get a sense of biblical teaching and how that teaching applies today. The Bible teaches that beauty is a gift of God and that clothing is part of that gift. While 1 Peter 3:3 warns of "outward adornment", it also uses Sarah as an example. Sarah was so beautiful that two kings fell under the spell of her beauty that they took her from Abraham. This passage does call us toward the adornment of a godly spirit. This means that real beauty is the opposite of "skin deep." It goes all through the depths of the soul, but it includes the tangible world of our physical appearance...and our clothing.

For moms (who are usually the one's providing positive instruction for daughters) talking through this can be a tall order. If you don't understand fashion or if your fashion sense screams late 80's find someone who can help. There are, in fact, two important friends you need to meet. First, find an older woman who can give you confidence and principles (and maybe even good stores that provide inexpensive, modest, but fashionable clothing). Second, you either need to become (by learning) or find someone who can go shopping with you and/or your daughter. She should be someone that your daughter would look up to, and someone that you would be very happy having your daughter emulate. Her opinion and encouragement will have a massive impact on your daughter's fashion sense and sensibility. You might find this young lady at church, at school (this is actually one of the greatest blessings of having our daughters at Veritas!), or in some social connection. She has to be virtuous so that you can trust her, and attractive so that your daughter will wish to emulate her. Note, also that this young lady probably will not have any sense about budget or spending! If you need to have her go shopping with your daughter, make the budget clear!

2. You can influence a lot by setting good standards and by your reactions to the standards of our culture. In this, dads are very important! Good standards are set by mom's choices in clothing and by parental standards of what you will allow or require for your children. Don't be hypocritical. At school, our students have uniforms and our faculty does not, but I often tell our faculty: "Don't dress so casually that you make your students jealous. If our students' clothes are fitting for academic work, then ours should be something like theirs." Your example is massively instructive!

Also, and this is where dads have a critical role in the lives of their daughters, we need to react in a godly manner to the sleazy, immodest clothing (or lack of it) in our culture. There are a couple of ways in which dads should react and one way they should NOT react to public immodesty. At our home, these reactions usually happen during a movie we are watching or around commercial breaks in sporting events. The three good reactions to the immodest starlet in the movie or way-too bouncy cheerleader on the sideline are pity, chuckling, or looking away. The godliest reaction is often just looking away, but this is not enough. Dads should look for opportunities to put words with their actions as he turns off the movie, changes the channel, or skips the scene. You should make sure that your children know why you are doing it. It is not because they aren't old enough for those things. Our culture's misuse of the words "adult" and "mature" are telling. What our culture means by these words is the opposite of what they actually are! We change the channel because immodesty is degrading. We should not welcome it into our homes. Pity should be expressed at this time. Pity is a proper reaction because if a woman has to degrade herself to get attention, then she is to be pitied. Finally, and I have to admit this is the one that happens most during sporting events or at the beach, dads can look to their daughters with a raised eye brow and a chuckle because of the ridiculousness of the outfit the immodest person is wearing. Of course, you have to be careful with this, don't do it to hurt the poor scantily clad girl's feelings, but your girls need to understand that immodesty is, for the most part, ridiculous. If you can see the world this way and encourage your daughters to see it this way, you have gone a long way toward helping them make good choices! It should go without saying, but the wrong reaction is for dads to ogle the immodest woman. This teaches a daughter that men find immodesty attractive. It tempts her to emulation. Dads have to change the channel, shake their head, or raise their eyebrow. They must not stop and stare.

3. Finally, make judgments biblically and make them in a manner that helps your daughter see that you are trying to protect her (even if she does not agree with the decision). Recognize that some things are based on biblical principles and other things are based on personal tastes. If your daughter is leaving the house dressed in a manner that should inspire pity, you--as a parent--need to protect her from herself. If she lives with you or is your dependent, you should still have a say (this goes to say if you are paying her tuition as well). Sometimes, however, things are not a biblical issue. They are simply a matter of taste. If you imagine that issues of taste will cause less friction than issues of biblical principle, then you are sadly mistaken. In matters of taste, I would recommend that parents and children talk them through, and that they compromise. Note to parents: compromise is different than talking about something and then deciding to do whatever the parents thinks best. Often, compromise means setting standards at a point that is biblical, but not one that simply reflects the desires or tastes of the parents. These sorts of compromises head off rebellion and broken relationships. Doug Wilson once said, "If you child hates your standards, lower your standards." I could not believe it when I heard it, but now I think it to be one of those lines that is very wise. When your child is not arguing for something that is immodest or wicked, but that simply is different than your tastes, you have an incredible opportunity to talk with them and to work to find a way to set a standard that they can love and embrace.

On a side note, avoid the overly aesthetic emphasis in some parts of our culture today. Kids in classical schools can often fall into this. We pay attention to beauty. There is a whole subset of culture that is so beauty conscious that they would probably put on makeup to shovel manure. If your daughter or son is falling into this, do two things. Talk with them about it and find dirty work for them to do. Mission trips are a great cure for soft American fashion addiction! There is no glory better than that which will reach out to embrace those mired in poverty or squalor. Sweat cures many ills.