Explorers through the Birth of America

One nation, under God, indivisible, with liberty and justice for all... 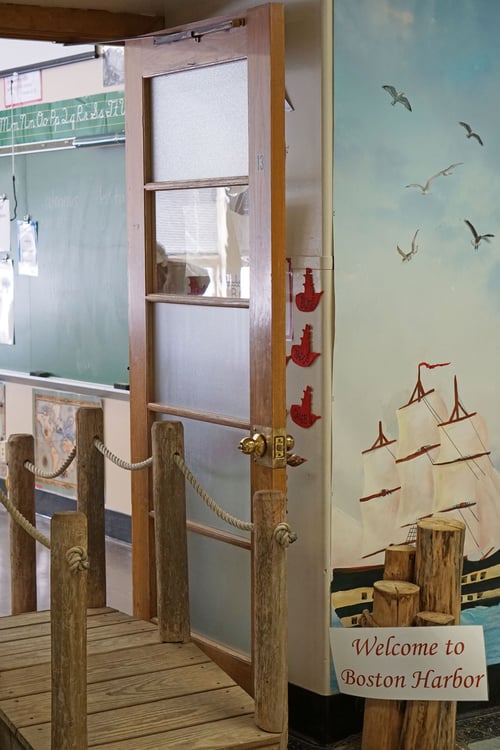 Your fifth grader will gain a whole new appreciation for the freedoms and blessings we have as Americans after this year of study at Veritas Academy. It's not unusual to see our fifth graders wandering the halls dressed in full Colonial-era garb (complete with tri-corner hats) or even pirates of the high seas. For much of the second semester, signs around the school direct visitors to Boston Harbor (the fifth grade classroom), where students cross the dock to enter their nautical-themed room. Telescopes, helms, and even the hull of a wooden boat adorn the room, where kids dive into the blood, sweat, tears, and ultimately faith and God's hand that led to the birth of our nation.

Writing assignments, literature, and devotions all take on the flavor of this exciting time in history, helping to bring it all together in a beautiful and memorable way.

Following the Veritas Press History cards: Explorers Through the War of 1812, as well as additional historical resources, the students will take an interactive journey through Western history from 1394 to 1820.

The classroom begins as a seaport from which fifth graders set sail as the early explorers of the New World, sailing around North and South America. By mid-year, the British flag waves proudly at the front of the room as they establish themselves as a Colony of His Majesty King George III and his Imperial Redcoats (played yearly by our Upper School Omnibus Teacher Mr. Bill Dawson and our ninth grade class, who meet in the London classroom and study the literature and history of the same time period). 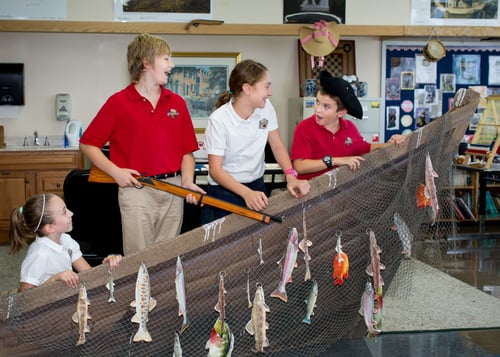 After experiencing a series of injustices and onerous rule under the heavy hand of their ninth grade counterparts who are frequent visitors, our fifth graders decide they've had enough and want to rule themselves. Weighing the risks and limited options,  revolution is declared, "tea" is tossed overboard our classroom boat, a Declaration is posted on the London classroom doorway, Betsy Ross's first American flag replaces the British one, and eventually, a Peace Treaty is formally signed in our Paris classroom when the British surrender their sword. Huzzah!

Students will learn about seafaring and the explorers, about Puritan, Colonial and early American life, and the wars that preceded our independence, among many other things. Costumes, role play, field trips, and crafts (they'll make candles, Redware pottery, hornbooks, and more) solidify it all and make it even more fun.

As students finish the Old Testament in fourth grade, we dive into the Gospels in fifth grade. This is a beautiful time of getting to know Jesus and His works and ministry even better. Using the Veritas Press Bible Cards (studying a different event or passage each week for 32 weeks), as well as the students' personal Bibles and Journey Through the Bible references, we include handmade projects, object lessons, and student presentations (such as their Parables dramatization project) which all work together to allow students to reflect on the goodness of God and His wonderful redemption story. 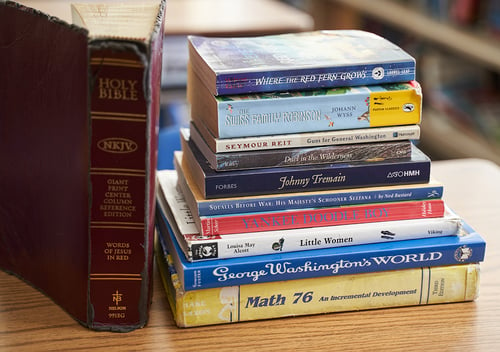 Some of the books we read in fifth grade include, Johnny Tremain, Little Women, The Swiss Family Robinson, Where the Red Fern Grows. We read out loud as a class and encourage independent reading as well, doing plenty of projects and hands on activities that bring the literature to life. Our reading takes us on a journey in fifth grade as well. In the first quarter students will read to Circumnavigate the earth with Magellan. During the second quarter students will read along the route of the Midnight Ride of Paul Revere. Third quarter, students will read across the country and arrive at the pacific with Lewis & Clark.

Grammar continues with the Shurley method, reviewing and reinforcing the concepts already learned, including: sentence forms, parts of speech, phrases, and closets. Grammar is the basis for good writing, which is a favorite subject for many students. 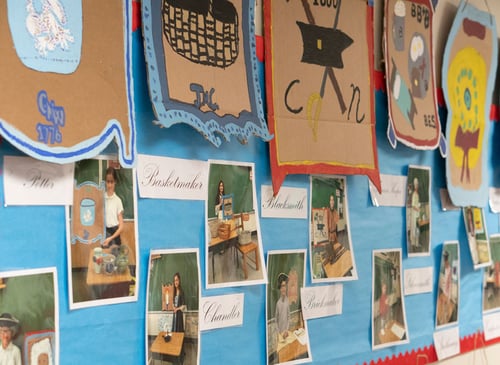 5th Grade math curriculum uses Saxon 76. Some of the concepts students will perfect this year include the Order of Operations; finding the variable; greatest common factor and least common multiple; geometry principles; percents; reciprocals and improper fractions. Through it all, they will gain an increasing understanding of how God gave us numbers and mathematical systems to help us in life and to also help us understand His immutable (unchangeable) and logical character.

This year in Latin students work through Latin for Children Primer C. They will learn all noun declensions, tenses in the perfect system, third declension adjectives, and interrogatives. By the end of the year they will be able to translate compound sentences, and longer passages.

In Fifth Grade our students begin to work on their public speaking and memory skills. During the year they present or recite the following: “In 1492”, Colonial Life Reports, Colonial Trade Reports, Animal Reports, their portion of poem “Midnight Ride of Paul Revere,” The Preamble to the Constitution, and The Beatitudes, among other projects. 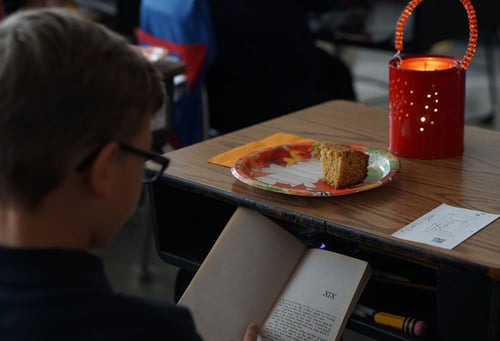 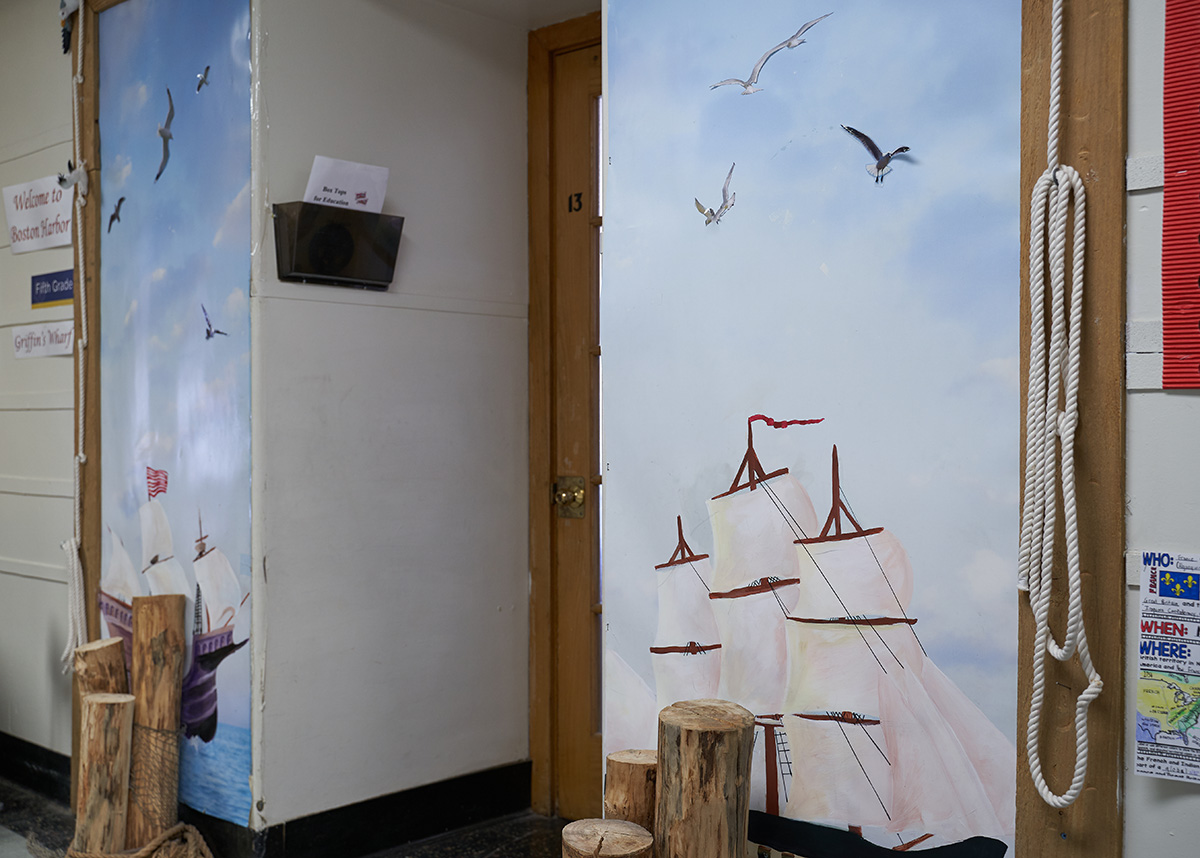 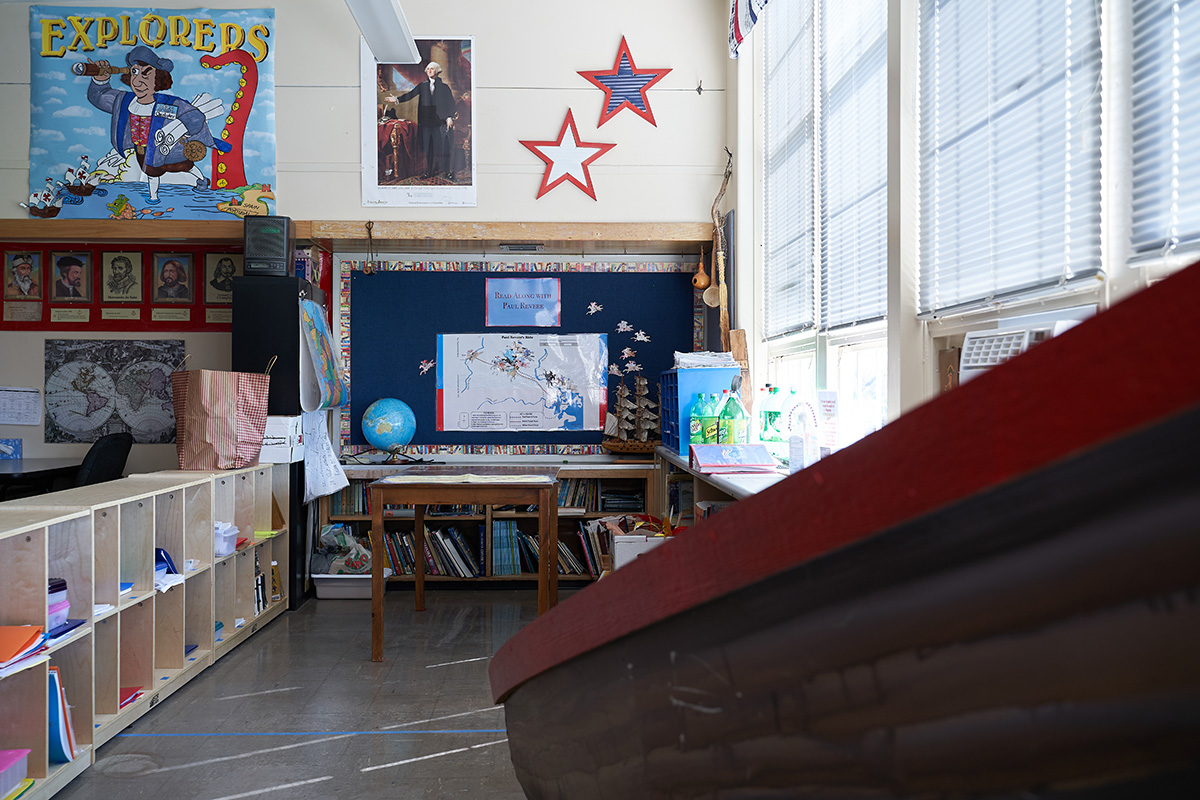 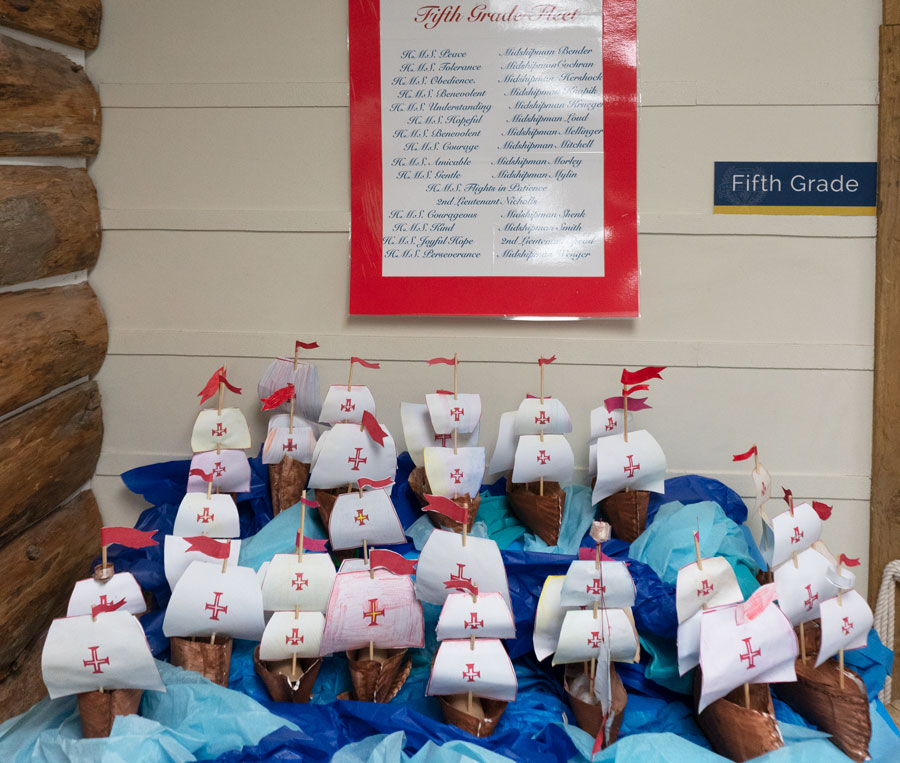 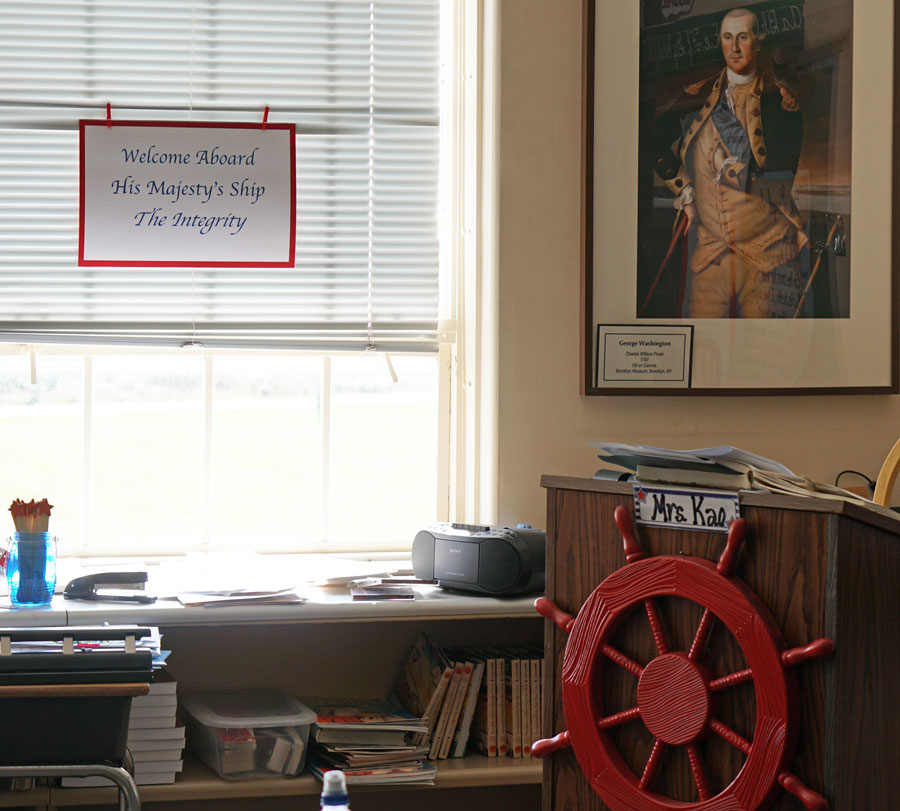 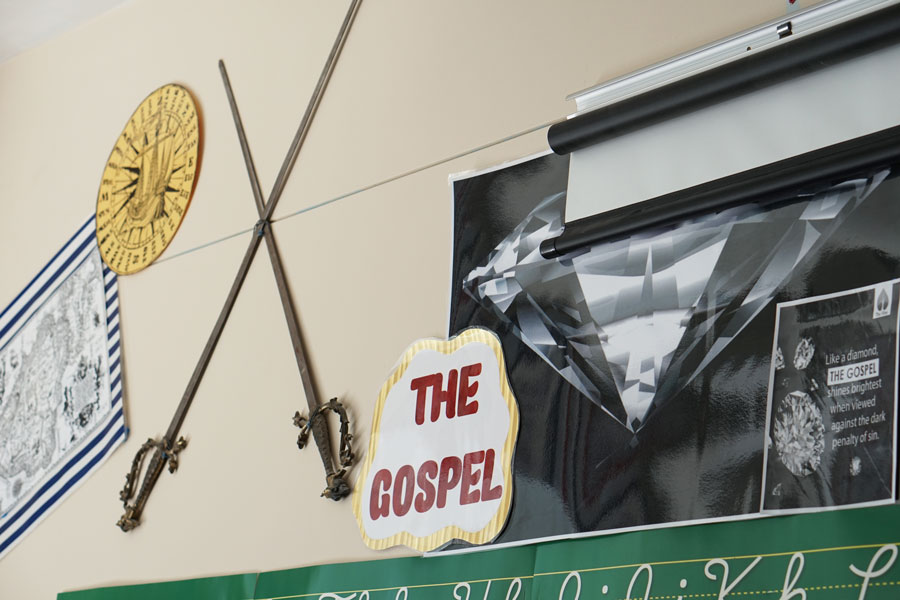 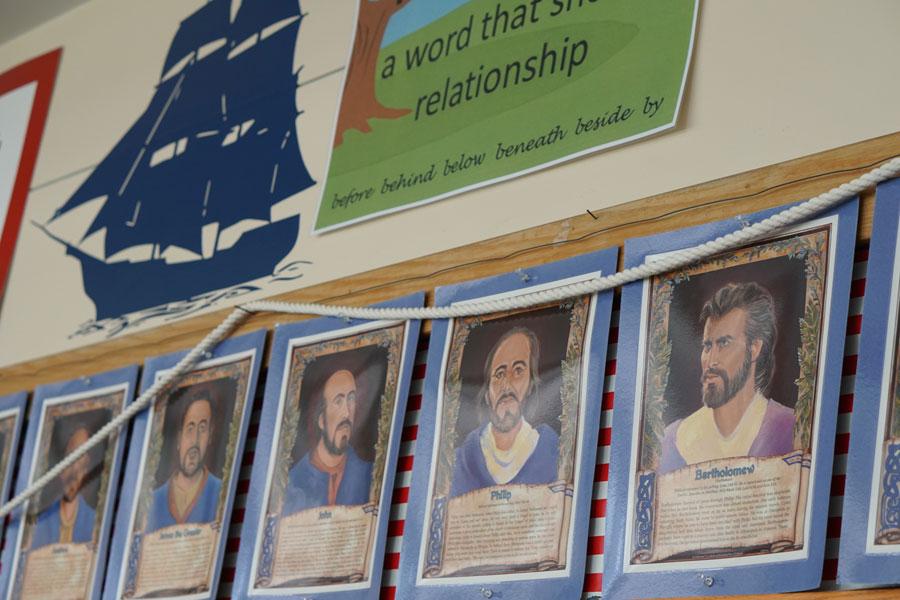 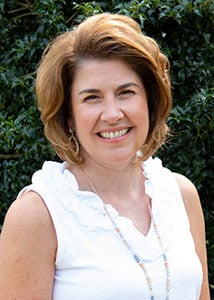 Want your child to experience this opportunity to pursue truth, beauty, and goodness for Christ's calling each day at school? Visit Veritas Academy to see it all first hand!